The inventors from the laboratory of Dr. James Cook have synthesized novel imidazobenzodiazepine (IMBDZ) compounds that act as GABAergic receptor ligands that are α3, α2, or α2/α3 subtype specific. These compounds should be useful for the treatment of anxiety disorders, epilepsy, and neuropathic pain. The α2 and/or α3 GABAA receptors have been shown to mediate anxiolytic activity, while the α1 containing receptors have been suggested to mediate sedation, anticonvulsant activity, loss of muscle coordination, anterograde amnesia, and in large part mediate the addiction of BDZs. It is believed that agents acting selectively as BDZ agonists at GABAA/α2, GABAA/α3, and/or GABAA/α2/3 receptors possess desirable properties and would aid in preventing the side effects of sedation, ataxia, amnesia, tolerance, and abuse potential. These novel ligands lack ester linkages and are thus relatively insensitive to hydrolysis by esterases, conferring greater metabolic stability in human liver microsome assays.

Preliminary studies indicate that one of the lead compounds was non-sedating in a rhesus monkey using the Vogel conflict assessment model, suggesting an anxiolytic effect (devoid of ataxia and sedation). BDZs modulate the effect of the class A neurotransmitter receptor for gamma-aminobutyric acid receptor (GABAA). Classical BDZs most often have major side effects during treatment including tolerance development, addiction, and adverse psychological and physical effects. Tolerance has been attributed to the α1 and α5-subtypes. The Cook ligands are nearly silent at the α1 and α5 BDZ GABA subtypes, therefore promoting anxiolytic and anticonvulsant effects devoid of the side effects observed using α1-subtype ligands. In addition, reports have shown that patients using BZDs for schizophrenia have a higher likelihood of early death by suicide, partly attributable to the severe anxiety and insomnia experienced as withdrawal symptoms if patients stop using BZDs or take them for extended periods. Subtype specific GABAA receptor ligands have great potential in preventing many of the side effects and problems observed with the currently marketed BZDs. 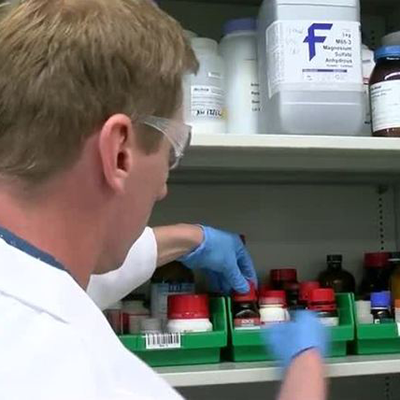 This technology is part of an active and ongoing research program and is seeking partners for development of the final product. It is available for developmental research support/licensing under either exclusive or non-exclusive terms.

Anxiety disorders represent the most commonly occurring mental health condition in all age groups. A Global Industry Analysts report on anxiety disorders forecast the global market to reach $5.9 billion by the year 2017. The market growth is attributed to the increase in stress levels worldwide related to financial crisis, increased incidence of disorders, the growing aging population, the existence of significant unmet needs, and the recent development of novel therapeutics. The U.S. represents the largest regional market for anxiety disorder therapeutics worldwide, and costs the U.S. over $42 billion per year accounting for almost one-third the overall cost for mental illnesses. Anxiety disorders are highly treatable yet only about one-third of those suffering seek treatment. The Cook ligands should be active against GAD, SAD, OCD, PTSD, and many phobias.

The 2011 global schizophrenia market was valued at $10.9 billion. Several of the blockbuster drugs for schizophrenia will go off-patent by 2011 and 2012. New pipeline drugs will be needed to support the market growth. GlobalData has released a report estimating the global epilepsy market at $2.9 billion in 2010 and forecasted $3.8 billion by 2018. BZDs have continued to be important agents in the management of epilepsy and schizophrenia. The Cook group has also developed α5 and α2/α3/α5 BZR GABAA ligands active in PPI and MAM models (screens for potential anti-psychotics) without catalepsy.  The goal is agents that treat the positive as well as the negative effects of schizophrenia with no tolerance, sedation, amnesia, and little to no abuse potential.

James Cook (Lead Inventor and PI)
Dr. James Cook is a University Distinguished Professor in the Department of Chemistry & Biochemistry at the University of Wisconsin-Milwaukee. He obtained his PhD in Organic Chemistry from the University of Michigan followed by postdoctoral research at the University of British Columbia. Professor Cook’s group works in several fields including Natural Products, Medicinal Chemistry, and Organic Synthesis. A large focus of the Cook laboratory revolves around anti-anxiety drugs. However, his laboratory is currently seeking drugs to treat schizophrenia, alcohol abuse, and neuropathic pain. In a related program, they have a compound in pre-clinical development for Alzheimer’s disease. His goal is to create drugs that are better and safer than those currently on the market for CNS disorders.