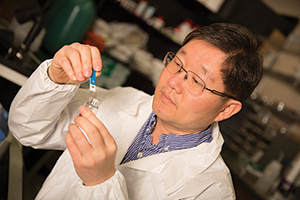 by Francesca
News, Sensors, Water
By: Laura Otto As the Korean city of Daegu works to establish itself as an economic water cluster, a film crew from the Korean Broadcasting System recently completed a documentary about fostering new water technology – and devoted 10 minutes of its show to activities in Milwaukee. UWM engineer Woo-Jin Chang was among those interviewed. Chang, who is a native of South Korea, demonstrated miniature water sensors that he developed through collaborative research at UWM’s Water Equipment and Policy Center. In the documentary, Chang demonstrates his electrochemical sensor platform that can detect heavy metals, water acidity (ph) and nutrients at low levels in water – instantly and cost-effectively.He explains in the documentary that the chemical coating on the sensor changes the target. 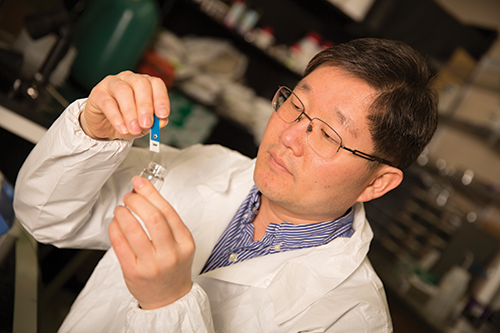 The sensors have been licensed by three companies in non-exclusive contracts. Now Chang, an associate professor of mechanical engineering, and his co-inventor at UW-Madison are collaborating with a California-based company to commercialize them. The thin, disposable sensors are the size of a small Band-Aid and cost a little more than $2 each, although Chang is working to bring the cost down to $1. The heavy metals sensor can detect one or more contaminants, including lead, mercury and chromium, in a single use. Chang is working on expanding the number of heavy metals that the sensor can measure.Chang spends more time in the documentary discussing the acidity and nutrient sensors. Filmed on the banks of the Menomonee River near the Global Water Center, Chang dropped one of his prototype ph sensors into a glass container of river water and then explained that the sensor can also gauge acidity in just one drop of the water. In another segment, Chang and Val Klump, dean of UWM’s School of Freshwater Sciences, looked at the large equipment containing sensors that the school’s scientists use to measure conditions in Lake Michigan. Klump commented about the need for Chang’s small phosphorus sensors for ecological research. Monitoring phosphorus gives researchers important information about the aquatic food web and algal blooms that pose a health threat to people and fish. “A sensor like the one you’re developing has the ability to measure phosphate in high-resolution, temporally and in situ – and a key piece of the puzzle in trying to figure out how these (freshwater) systems work,” Klump said in the film. “The world’s going to beat a path to his door as soon as he gets this sensor built.” The filmmakers tapped Milwaukee because the Korean Water Cluster and the City of Daegu want to be connected to leaders in water technology, such as The Water Council. Daegu and Milwaukee became “sister” cities in 2017 around a shared interest in water technology. Read the original article from the UWM Report here.